In response to a comment, I’ll say a little bit more about some of the issues that come up with sending PDF files to Lightning Source (LSI). With each of my two previous books (about the Leica D-Lux 4 and the Panasonic Lumix LX3) that were (and still are) printed by LSI, I had my files rejected at least once for technical problems. The publisher (me, in this case) has to submit two PDF files for each book: one file for the text of the book, and a separate file for the cover. These 2 PDF files have to meet a set of precise specifications, including document size, bleeds, ink coverage, etc., some of which I really don’t understand at all well. For example, all colors in the files have to be CMYK, which stands for cyan, magenta, yellow and black, which are the colors used by printers (the machines, that is). Generally, when you or I work on the computer, the colors are considered RGB, for red, green, and blue, which is the color system used by monitors. When you create the PDF from the original document, you have to make sure all RGB colors are converted to CMYK. This process can make the colors look a bit different; blues may look more purple, for example. Some publishers undoubtedly have equipment and software to calibrate their equipment so they can see what the end result will look like on paper, but I don’t. This issue is generally taken care of by generating the PDF using the proper process. In this case, the proper process, starting with a file in Adobe InDesign, is to print the file to a PostScript printer file, then process that file into a PDF file using Adobe Distiller. This procedure has considerable complications, especially for someone like me who uses a Macintosh with the Snow Leopard operating system, but I eventually was able to work through them and generated the files properly.

Another issue I have run into is with the resolution of images. LSI wants the photographs in the text and cover to be generally 300 dots per inch, which is a good, high resolution for printed work. In the past, I received notices from LSI saying my text file contained images that were considered low resolution, but they would print them anyway. The lowest resolution they will accept is 72 dots per inch, which is the resolution for most images when viewed on a computer monitor. Those images looked okay in the printed books, but this time, for the Panasonic Lumix LX5 book, I was more careful to generate images with at least 300 dpi resolution in Photoshop. I must have succeeded, because this time around I did not receive any error messages from LSI about low resolution images.

Those are the major issues I have run into, though I’m sure other publishers have had other issues in meeting the specifications for LSI printing. You can get more details at www.lightningsource.com, where there are various publications available about their printing process and their file creation requirements.

I probably shouldn’t keep going on to the Lightning Source web site to check on the status of the Panasonic Lumix LX5 book; after all, they say a watched pot never boils. But I needed to take a break from doing some fairly tedious work in Photoshop, so I loggged on to my account just to take a quick look, and the status had been updated. The status as of today is: “Proof has been generated.” My interpretation of this status is that they have printed out a copy of the book and its cover, and it’s waiting to be inspected by the quality control people; once it passes inspection, it will be shipped overnight to me so Clenise and I can review and (hopefully) approve it.

Of course, there’s no way to know what the exact schedule will be, but as of now it seems possible that the proof could ship out on Monday or Tuesday, and get to us in Virginia on Tuesday or Wednesday. So, if all continues to go well, the book still seems to be on track for becoming available for sale by late next week or thereabouts.

In the meantime, here are a couple of photos taken by the LX5. The first one is included in the book; the second one did not make it because of space limitations. 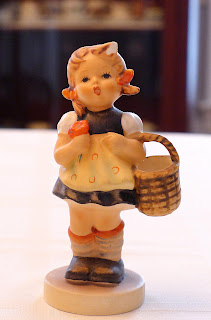 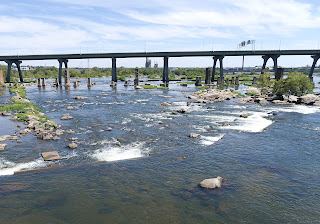 Today I received an e-mail message from Lightning Source advising me that my order for a proof copy of the Lumix LX5 book has been confirmed. I then went on their web site and checked the status of the book; it reported that the “book block” and the cover have both been “accepted.” That was good news! That means that there were no technical problems with either the interior text of the book (268 pages, including Table of Contents and Index), or with the cover. There are quite a few technical problems that can arise (and have in the past), such as incorrect document size, some fonts not embedded, wrong resolution of the images, colors that don’t conform to the CMYK (cyan, magenta, yellow, and black) standard, etc. Now the book’s status is shown as “print ready.” I just have to wait until Lightning Source puts the book in one of its printing queues and produces a proof copy. They will then ship it to me overnight for approval. If it looks OK, I will approve it online, and that releases it for distribution through Amazon.com and other sellers. Based on past experience, I think the proof may get to me by about Wednesday, November 3 or thereabouts. If it is in good shape, Amazon may start selling the book by the end of next week. Of course, everything is out of my control at this point except approving the proof copy. I will be very quick at that step, once I receive the proof copy.

By the way, here is what the cover of the book looks like: 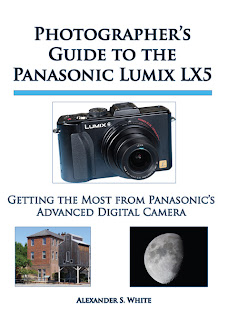 I checked today on the Lightning Source site, and the status report is that Photographer’s Guide to the Panasonic Lumix LX5 is in “premedia,” which means the technicians are checking the PDF files for the interior text and the cover to make sure they comply with all of the technical requirements, before the files are set up to print on the company’s printing equipment. If the process continues to go smoothly, they will print a proof copy and overnight it to me, maybe by early next week. Once I approve the proof copy of the book, the book will start gradually to become available at Amazon.com and other online sites.

For now, I have uploaded to this blog a link to a PDF excerpt with Table of Contents and the first few pages of the book about the Panasonic LX5 so you can get an idea of what subjects are covered and what the text and illustrations look like. So, take a look at the excerpt that I have included in the links section of the blog, and see what you think.

Finally, after the past few days of sometimes-frustrating proofreading by Clenise and me, a little while ago I uploaded the PDF files to the printer, Lightning Source.  The book, Photographer’s Guide to the Panasonic Lumix LX5: Getting the Most from Panasonic’s Advanced Digital Camera, should start showing up as available on Amazon.com within a week or so, if all goes well. In the past, I’ve had problems with PDF files that did not meet the specific requirements of the printer, though this time I think I did better than previously, having learned from my mistakes, and having been very careful to follow all the steps exactly to produce compliant files.

I did change the file with the text of the book a couple of times today, as I spotted last-minute problems in the layout.  In one case, the photos of the HDMI cable connecting to the camera were misplaced next to the discussion of connecting the regular (non-HDMI) cable. That was a pretty small thing, but I don’t like to have any mistakes in the book, if I can find them. Inevitably there will still be some typos or other glitches, but I did my best to find and eradicate them.

As of now, the book will be available only in printed form, though I have it scheduled to be converted for the Kindle in December (the formatting company always has a hefty backlog), and I may make it available on PDF within the next few months, depending on how things go with the printed version. The book is already listed on bn.com (Barnes and Noble’s site), because I submitted the information about the book through the Bowker company, which runs Books in Print.  Bn.com has it listed at a substantial discount, but, based on past experience, they won’t actually fill any orders at that price, and will cancel them if anyone pre-orders the book, because the book is not going to be available at that price.  I believe BN just assumes it will be, because most books are heavily discounted by the publisher to get them into stores.  In my case, I can’t offer a heavy discount, because it costs so much to print each book, partly because of the color photographs. It will eventually be available at BN.com, at a more regular price.

I’ve mentioned briefly in response to comments that I’m working on a book about the Panasonic Lumix LX5, the successor to the LX3 (the number 4 was skipped because it is unlucky in Japan, according to members of the dpreview.com Panasonic Talk forum). I got the camera as soon as I could in late August, and I’ve been working on the new book ever since. It’s a great camera, very similar in size and features to the LX3, but it has a longer zoom range, much stronger movie-recording capability, and quite a few other new or enhanced features, such as a My Color shooting mode that gives a strong range of color and monochrome effects. The camera is certainly different enough from the LX3 that it needs a new book to do it justice.

Right now I have the text and illustrations (163 color photographs) finished, and my wife is proofreading what I expect to be the final draft. Then, either tonight or tomorrow, I will send the PDF files to the printer. After that, with good luck it will take about a week or so before the book becomes available on Amazon.com and other online sites.

Once this book is out and available, I hope to start on a new version that covers the Leica D-Lux 5, which is very similar to the LX5, but has a different outer body and different look for its menus. Depending on how busy things are otherwise, I hope to get that book done by the end of this year. In the meantime, though, the LX5 book should be of considerable use to D-Lux 5 users, because there are no really significant differences in the operation or features of the two cameras, at least none that I’m aware of as yet. (I’ve only had my D-Lux 5 for few days, and haven’t done that much with it yet.)