I haven’t discussed the cover of my book very much, so I’ll talk about that now. I think I’ve made some good progress on that aspect of my project, thanks in large part to one of the volunteer readers who I met through the Leica Talk forum at dpreview.com.

I have no background in graphics, art, or design, though I have used Photoshop and other graphics software sporadically over the years. The expert advice in the books I’ve read about self-publishing says you should get a professional designer for your book’s cover, because potential buyers will judge the book by its cover, and a poorly designed one reeks of amateurism.

In my case, though, money is a major concern. When I self-published Dauntless Marine back in 1996, I was willing to spend money to have the cover professionally designed, and that book has a very nice-looking cover. This time around, though, I’m trying to keep costs down as much as possible to see if it’s possible to make a profit, or at least to avoid taking a loss. So I set out to design the cover myself. I did look into some book cover design software, and downloaded a demo version, but it did not seem to offer enough value to justify its cost of approximately $200.00. So I decided to design the cover using Adobe InDesign CS4, the same program I’m using for page layout for the book itself.

Here’s an example of one of my earlier attempts at cover design for the book about the Leica D-Lux 4 camera: 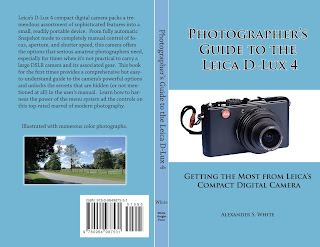 I was fairly pleased with myself after I developed this design. But fortunately, the volunteer reader had a strong background in graphic design and catalog production, and she offered a very helpful critique of the cover, including points about different shades of blue, the unwise use of vertical lines to outline the spine area, bad choices for the fonts, etc. Her criticisms made a lot of sense, so I heeded her advice. She recommended I try for a mostly white cover with some highlights in red, black, and gray, to reflect colors associated with the classic look of Leica cameras themselves. So I tried that approach, and came up with the version shown below, which is very likely close to the final version of the cover: 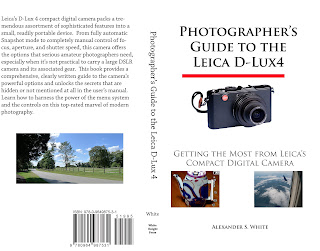 To me, the newer version is clearly a better choice, and I am indebted to my volunteer reader for helping me make that change.

Another issue was printing the cover. I originally chose a cover stock based on the recommendation of Rupert Evans in his excellent book, Book on Demand Printing. He recommended KromeKote C1S (coated one side) stock, which is shiny like a trade paperback cover on the printing side. I tried it and it worked well. The problem, though, is that I could find it only in one size – 8 1/2 by 11 inches. The book is to be printed at two pages on each side of a sheet of paper that size, so each page will be just about 8 1/2 by 5 1/2 inches. As the book gets up to and beyond the 200-page point, the spine is getting quite thick, so I can’t use letter-size cover stock to wrap all the way around those pages, even if the pages are trimmed down somewhat.

So I had to search for cover stock in legal size, 8 1/2 by 14 inches. I think I have found a good candidate, called Galerie XP Silk Cover. It’s not cheap, costing over $70.00 with shipping for 500 sheets. But I’ve printed a sample cover on it, and it looked very good. It’s not shiny, but it’s stiff and substantial, and the color laser printer prints well on it.

The legal-sized cover has a nice appearance and it easily wraps around a 200-page book, so I think the cover problem is essentially solved.

This entry was posted in Uncategorized on October 20, 2009 by Alex White.