Today my shipment of Panasonic Lumix LX5 books printed by Lightning Source arrived at my home, so I can now send copies out to people who commented on a draft, and to reviewers. Also, I now have a book ready to send out as the prize for the contest being run at the Photo Rumors site. I will include a free pair of 3D glasses with each book that I send out from home; I ordered a large batch of the glasses, which, as the book states at page 222, I will send out to any purchaser of the book who requests one, because the book has one 3D image, and has instructions for how to make your own “anaglyph” 3D images using the LX5 camera.

Today was the first time I could find the book at all on the Amazon.co.uk web site, the British version of Amazon.com. I had to enter the ISBN (9780964987593) as the search term, but the book did show up, listed as “unavailable.” That’s actually a good sign, though, because now the title is in the database in the UK, and fairly soon it should start showing up as available.

Up until about 8:00 p.m. Eastern time in the U.S., I have had 16 orders for the PDF version of the book. The orders have come from Singapore, Australia, Spain, Poland, and the United Kingdom, in addition to various U.S. states.

I have been adjusting the amount of money I spend daily on Google AdWords, which is the system that puts up a small ad for the book whenever someone types a particular search term into Google, if I have signed up to bid for the right to display my ad when that term appears. At first I thought my spurt of sales yesterday came from my AdWords campaign, but today I increased the ads, and sales dropped off. I think that sales are either more random, or more likely are sparked by things such as announcements appearing on new web sites, such as the contest that started on Photo Rumors yesterday.

Here is photo of the box of books that arrived today, taken by the LX5 using the lighting in my home office: 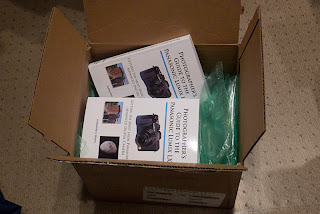