In my last post I talked about the Martin-Yale 7000e paper cutter. I’ll talk some more about equipment in a little while. First, though, an update about the latest draft of my book about the Leica D-Lux 4 digital camera. For several reasons, the draft of the book that was completed yesterday looked terrible when I was done. I had high hopes for this draft, because I had just received the final edits from the copy editor on Friday, October 9, and I received some excellent substantive comments from a volunteer reader from the Leica Talk forum on dpreview.com. I incorporated all of those comments into a new draft in Microsoft Word for the Mac, then set up a new document in Adobe InDesign. I chose the page size to be half letter, or 5.5 inches by 8.5 inches, so I could print them two-up (two pages per sheet of paper, in landscape orientation).

I got the draft formatted pretty well in InDesign, and it printed out nicely on the Brother HL-4070CDW color laser printer. I printed in duplex mode, on both sides of each sheet of paper. So, though the book is now just over 200 pages long, I only needed about 50 sheets of paper.

When the 50 sheets came out, I used the Martin-Yale cutter to cut the sheets in half, yielding two stacks of the book’s pages. The first obvious problem was that the pages were curled. And, because the pages were cut apart, the two stacks of pages curled in opposite directions. So, when I put them together to form the whole book, there was no way to get the pages to lie flat; the two curves fought against each other, leaving a gap in the middle of the book.

The next problem was that the black text and color photos all had a bluish cast, and some of the photos looked awful. I checked the printer’s software, which says the printer is low on magenta toner. I ordered a whole set of new color toners, which will arrive tomorrow. I’m hoping that will fix the color problem. I may have to change to a different type of paper (I’m now using Hammermill LaserPrint) to deal with the curling problem.

Finally, I did a lousy job of binding and trimming, so the final book was not squared off properly, and some pages were loose. Oh, well, improvement will come with practice. At least he cover looked fairly good, after I changed it along the lines suggested by one of the volunteer readers.

On to the equipment. Here is a picture of the Martin-Yale 7000e paper cutter: 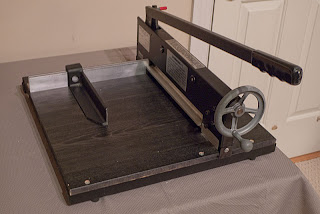 And here is a picture of the Brother HL-4070CDW color laser printer: 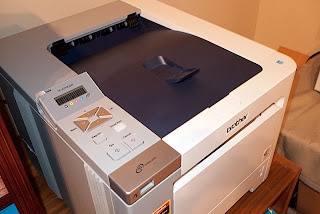 Now, some discussion of the machine I bought for perfect binding. This was the area I was most uncertain about, because book binding is completely new to me, and sounds a little scary. The books I mentioned earlier, by Rupert Evans and Roger Allen, talk about binding machines costing anywhere from about $5,000.00 to a million dollars, though they said you might find a used one for several hundred. I did browse around a bit, and saw a decent-sounding model on Craigslist for $2,500.00 used. I didn’t seriously consider it, though, because it would have been bought sight unseen, and if it had problems I would have no way to repair it.

Dr. Evans did talk in his book about using an electric frying pan to melt the glue for binding books, and I seriously considered that idea, but I decided it would call for too much ingenuity and probably would require me to improvise some other items, such as stands and presses to hold the book during the binding process.

Ultimately, I looked on eBay and found listings for brand-new perfect binding machines in the $700.00 dollar range. That seemed surprising, given the information about pricing in the books I had read, but those books are at least nine years old, and the market may have changed. So, I asked the seller some questions through eBay, and he responded quite quickly with helpful information about how the machine works and whether it would be suited for my application of binding paperback books in small quantities. I took a chance and ordered the machine. Here is a picture of it: 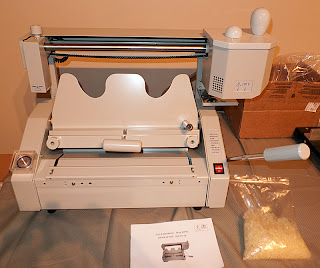 So far, I have been quite favorably impressed by the machine. I’ve bound about five practice paperbacks with it, and the results have been mixed, but I think that’s a function of my inexperience. The machine includes a device to “mill” the spine edge of the pages to roughen them so the glue will adhere well; the hopper on the right side holds glue pellets, which are heated by the machine to about 338 degrees F (170 degrees C), and then the melted glue is dripped all along the spine. You then use the machine’s big lever on the right to press down the cover against the glue-covered spine and hold it down for several seconds. The book is then bound; the hot glue dries and hardens very quickly. Then, three trims in the paper cutter and the book is (in theory) ready for distribution.

So, for now I’m working to improve some aspects of the draft, and then I’ll concentrate on working the bugs out of the printing process. I’m still hoping to publish the book later this month or sometime in November.

This entry was posted in Uncategorized on October 13, 2009 by Alex White.