Talking About the Leica D-Lux 4 Camera Itself

For a change, after I give brief update I want to talk a little about the camera that is the subject of my book: the Leica D-Lux 4. First, though, the update.

We’ve been working some wrinkles out of the production process; we found some of the bindings needed to be improved, and we think we have that situation under control now. Yesterday I tried raising the daily Google AdWords budget to $30.00, and we did end up with 8 orders for the day, as opposed to only 3 as of late evening today, with a $10.00 budget. So I have just put the budget up to $20.00, where it was when I first started the ad campaign. Hopefully that will increase sales of individual books.

Amazon.com now has the book listed for $13.46, even lower than the $14.96 it was listed at before, but it is still listed as out of stock, even though the UPS shipment of 27 books was scheduled to arrive at Amazon in Indiana today. There’s also a shipment of 5 books that should be getting there. I don’t know quite what the situation is in that area.

Now, back to talk a bit about the Leica D-Lux 4 itself. I’m including some pictures taken by the camera, which I haven’t done in a while. Here is a picture I took a couple of nights ago with the D-Lux 4, with no flash, showing a stack of books to the right of the binding machine, along with a group of covers that are going to be bound to these stacks of pages. The stacks are resting on top of the guillotine paper cutter that has already cut the pages to this size, and later will trim the books to their final size. This next picture, below, taken shortly afterwards, shows the books after they have been bound, trimmed, and wrapped in shrink-wrap bags, waiting to have the bags shrunk to make tight-fitting shrinkwrapping. 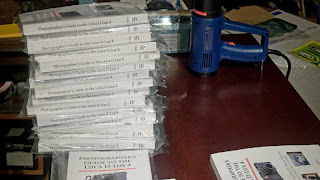 Next, here are some images from the book: 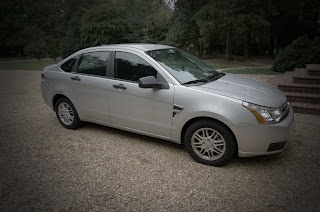 This image is an illustration of the “pin hole” setting in the camera’s Scene Mode. This setting simulates the use of a primitive “pin hole” camera, which tends to darken the corners of the image and adds some graininess to the image. 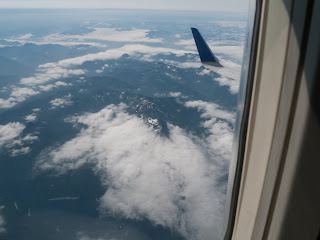 This image was taken using the Scene Mode setting of Aerial Photo, which is specifically designed for taking pictures through airplane windows. This was taken on a trip from Virginia to Seattle, approaching the Seattle area. 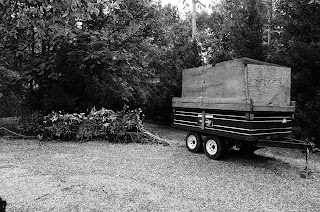 This picture was taken with the camera set to the Film Grain setting of Scene Mode, simulating the graininess of a high-speed black-and-white film.

Those are just a few samples of photos from the D-Lux 4. In a future post, I’ll talk a little bit about some other aspects of the camera, and why I thought it was worthwhile to write a book about its use

This entry was posted in Uncategorized on November 17, 2009 by Alex White.