Today I received some interesting and useful information from a reader of Photographer’s Guide to the Sony RX10. Risto Hellgren of Finland sent me a message asking whether the Sony RX10 camera is compatible with the Canon-compatible version of the Yongnuo YN-622 transmitter or receiver for triggering flash units remotely. I replied that I didn’t know, because I had never tested those units with the RX10, but I said I doubted there would be any harm in trying the units out with his camera.

I was somewhat surprised and pleased when Risto later wrote me back to say he had gone ahead and run some tests, and found that the Yongnuo units worked well with the RX10 camera for triggering a Yongnuo YN-568EX II Canon-compatible flash unit. In order to make sure I don’t misstate anything that Risto found from his experiments, I am going to include the text of his message here. (He gave me permission to do so).

Here is what he said:

I just put a Master unit into RX-10 hot shoe as such, configured master and slave flash group and channel to be the same.

To my great suprise everything worked perfectly (both in Test 1 and 2). Especially the YN622 TX as a master is here very good, because with that I can from Sony RX-10 (top of the camera) control remotely many flashes. With full control of three groups (A,B,C), flash duration (amount of light), shape of flash light (zoom). Certainly ETTL will not work, but I don’t miss it much. I have not tested HSS (high speed sync) yet, but I think it will work.

I have bought these Yongnuo units for my Canon DSLR, but they worked out of the box with Sony RX-10 too. Without any adapters or configuration hassle. I never imagined this when looked the physical look of Sony MMI ann Canon hot shoes.

I hope this piece of information is also beneficial for you – if somebody is asking this. I attached a photo to show the basic arrangement.”

The photo Risto included with his message is below. It was really helpful of him to report back with his findings, and I thought they might be useful for other RX10 users. 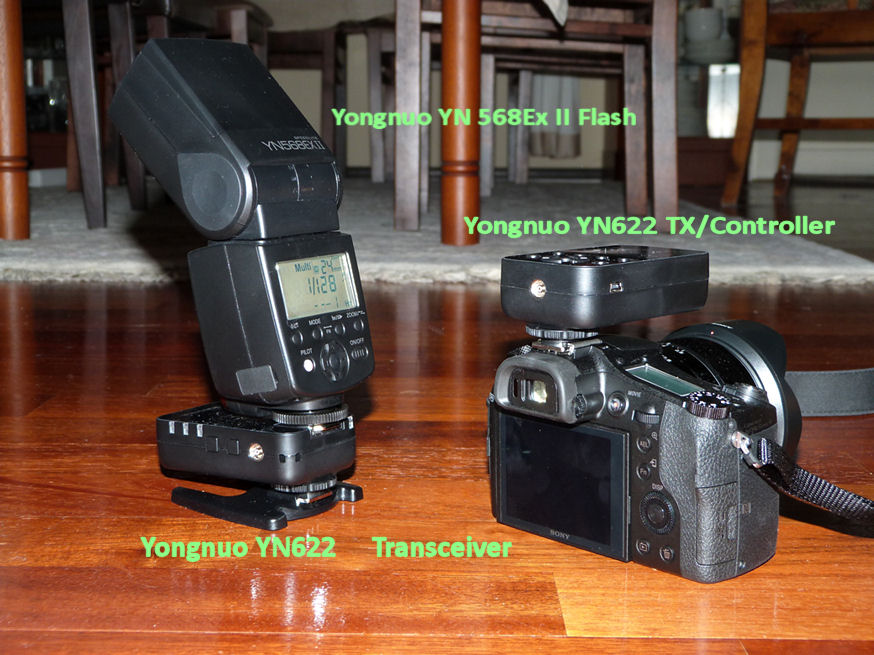